During a visit to Jerusalem’s Shaare Zedek Medical Center, the Ambassador of Kosovo to Israel, Ines Demiri pledged to establish medical cooperation efforts between the two countries saying that Kosovo has a great deal to benefit from the knowledge and experience offered by the Israeli medical community.
The visit came in cooperation with an initiative of the Jerusalem Municipality’s Office of Foreign Affairs, with Kosovo serving as one of the select first nations that has chosen to move their embassy to the Israeli capital city.
The visit to Shaare Zedek was hosted by the hospital’s Director General Prof. Ofer Merin who received a personal invitation from the Ambassador to head up a medical exchange delegation to Kosovo. While conceding that ongoing medical challenges have precluded him from any overseas travel since the onset of the Corona pandemic, Prof. Merin warmly thanked the Ambassador for the invitation and said he would certainly support the involvement of senior Shaare Zedek medical personnel in such a worthy effort.
During their meeting, the two focused on specific areas of possible cooperation between Israel and Kosovo and the potential for both countries to benefit from such a relationship.
“Israel in general and Shaare Zedek in particular has a long history of international cooperation with central involvement in many global medical relief efforts both in partnership with the IDF and smaller delegations of our hospital physicians,” Prof. Merin explained. “As a nation that has a clear desire to expand its healthcare capabilities for the benefit of its citizens, we would warmly welcome the chance to work with the people of Kosovo in areas of medical training both by welcoming physicians here to Israel as well as dispatching training delegations to Kosovo when the conditions allow.”
The visit also allowed the Ambassador the chance to salute Israel’s efforts both in addressing the Corona pandemic as well as the internationally leading campaign to vaccinate the country’s population.
While at Shaare Zedek, Ambassaor Demiri toured several of the hospital’s centers of excellence including the maternity complex which sees over 22,000 births annually- establishing it as one of the world’s leading center of maternity and neonatal medicine. She also toured the Wilf Children’s Hospital where she marvelled at the scope of therapeutic and medical services available to children patients.
“I was very impressed by this visit and the approaches to care and I thank Prof. Merin and Shaare Zedek for this opportunity,” she said. “We very much look forward to creating a program of cooperation between Kosovo and the Israeli medical community that will allow for the beginning of an exchange of knowledge and experience between our countries and we would certainly be more than happy to bring some of these similar services to now benefit the people of Kosovo.”
Upon completion of their meeting, Prof. Merin presented Ambassaor Demiri with a commemorative photo taken in 1999 when Shaare Zedek staff, together with then Jerusalem Mayor Ehud Olmert, had prepared humanitarian aid packages which were sent to Kosovar refugees of the war which had plagued that region. 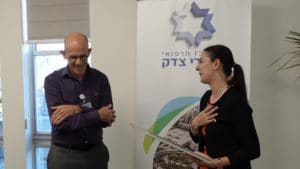 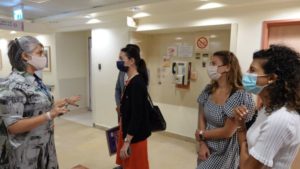