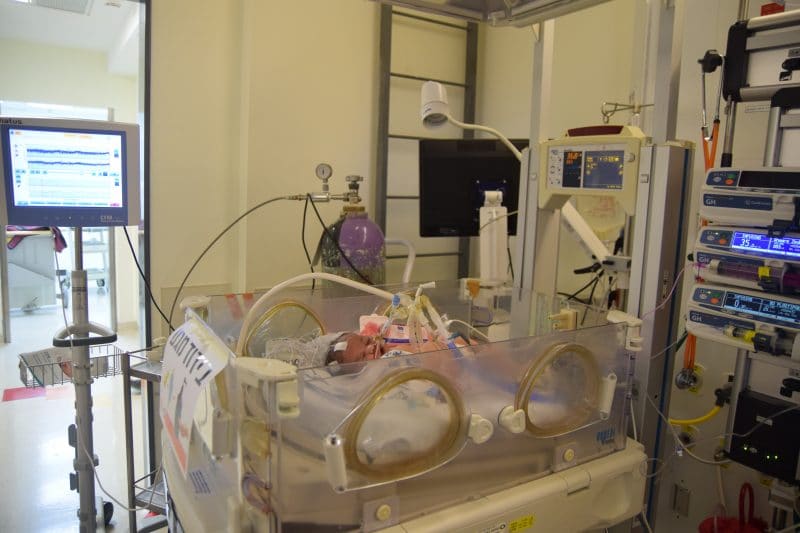 With more than 22,000 annual births, there are a sizable number of babies (approximately 700 per year) that leave the womb not yet ready for the rigors of the outside world. For them, we are proud to be able to offer the services of Shaare Zedek’s Huberfeld Neonatal Intensive Care Unit, known as the NICU.  The Unit offers parents the reassurance that should their infants require intensive observation or treatment in these critical early days, they can rely on a superb facility whose experience and expertise will ensure the best possible care for their child. In addition to the babies that come to the NICU from our own delivery rooms, a number of cases each month are referred from other hospitals throughout the country due to our well-established reputation for excellence in caring for premature infants. The NICU, located only feet away from our delivery suites, opened in 1998 as part of the Wilf Woman and Infant Center, and was originally designed to care for 30 babies in the busiest of times. A growing need for this facility combined with our sterling reputation has come to mean that 30 is on the low end of NICU patients typically treated at any given time, with that number routinely reaching 50. Despite the opening of an annex, space was limited and expansion of the NICU became one of Shaare Zedek’s most pressing development projects. Today, we are proud to say that Shaare Zedek’s NICU is Israel’s largest and most advanced, housing 70 independent infant stations over an area of approximately 3500 square feet. The Unit is staffed and outfitted with equipment that allows us to provide the most advanced levels of care possible — in an area of modern medicine where accuracy and technological development can make a remarkable difference in the prognosis of the patient.