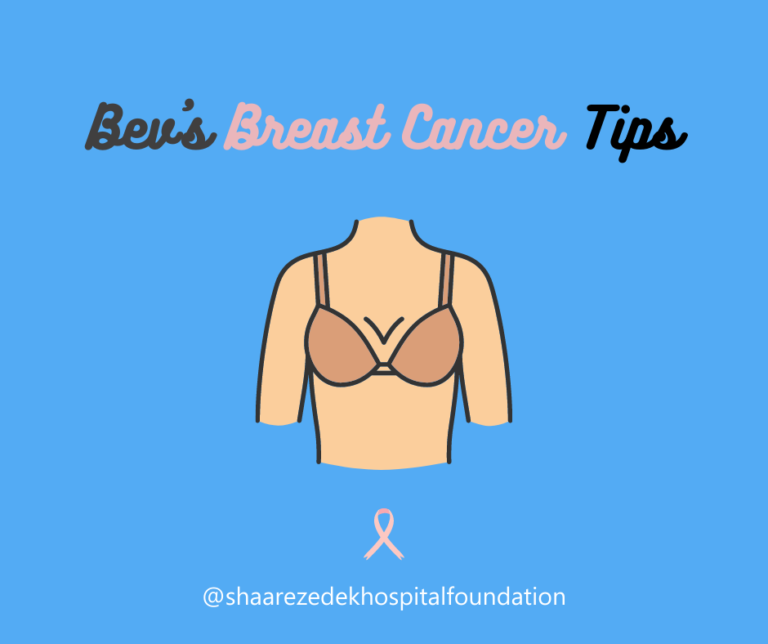 Picture this. It’s Wednesday and you’re about to uproot your entire life to a different country this weekend. As part of your “getting ready to move” checklist, you visit your family physician for routine tests and have a mammogram. You’ve always had lumpy breasts but every test result before this moment has been clear.

You get a call that the Doctors don’t like what they see.

Do you leave the country, or do you hunker down at home?

In Bev’s case, you board that flight to Tel Aviv. Fortunately, for Bev, she had a cousin who worked at Shaare Zedek Medical Center who said, “come and I’ll look after you.”

These were the comforting words that lead her to Dr. Strano. Bev says he’s probably one of the most respected doctors. People come from all over to have him do their mammogram. He’s the it guy.

Before Bev knew it, she was in surgery with Dr. Carmon getting it removed, and in radiation shortly thereafter. Eight years later, she still goes to see Shaare Zedek Medical Center’s Dr. Strano for routine check-ups.

And that’s her key takeaway, “Get a mammogram”. Why?

It saved her life.

Considering she didn’t feel, see or suspect anything unusual with her breasts, she wouldn’t have known that it was cancer unless she had a mammogram.

Sure, as Bev says, “it’s not a comfortable or pleasant procedure to put your breasts in a vice”, albeit for a short period of time, “but doing it regularly can save your life”.

Bev said: “you end up with a minute of pain a few times, but it doesn’t matter because if you find something early, you are going to save your life and a lot of awful things from happening later on.”

And if you ask Bev about Shaare Zedek Medical Center (which we obviously did), she’ll tell you they know what they are doing. The Hospital’s breast cancer care is very personable, and the doctors and nurses make you feel you are in great hands. The hospital goes the extra mile by assigning a nurse to you to show you the ropes including: guiding you through the whole process, explaining the preadmission procedure, walking you through what you need to do, where you need to go, and what to expect. Most importantly she is there for you when you have any questions.

The funny part is most people get off the plane after making Aliyah and go straight to the beach or the Kotel, but for Bev, she went straight to Shaare Zedek Medical Center to save her life.