With the end of the 2012 calendar year, Jerusalem’s Shaare Zedek Medical Center again confirmed its status as Jerusalem’s fastest growing major medical center. The growth is expected to increase substantially in 2013, with the recently announced merger of Shaare Zedek with Bikur Cholim Hospital.

The steepest increase is expected in the maternity departments where Bikur Cholim has recorded an excess of 6,000 deliveries per year. Operating under Shaare Zedek, this will bring the number of annual births in the Medical Center to over 21,000, believed to make it the most active maternity hospital in the Western world.
All statistics listed bel 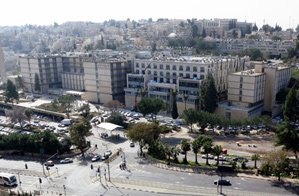 ow refer to Shaare Zedek’s numbers prior to the agreement with Bikur Cholim, which went into effect only days before the end of the year. 2013 statistics will reflect the numbers following the merger.
In the area of maternity deliveries, Shaare Zedek exceeded 15,000 deliveries for the first time ever, with the last baby born just minutes before the strike of midnight on December 31st being delivery number 15,054 accounting for 15,361 babies.
In response to the increasing need, Shaare Zedek expanded its number of patient beds to 800 and saw 66,000 inpatient admissions leading to 298,000 hospitalization days (reflecting a 7 percent increase relative to the previous year.)
23,100 surgeries were performed while the hospital maintained its average length of stay for patients in all areas at 3.9 days.
The outpatient activities increased at an even steeper rate, with 278,000 patients treated in relation to 241,000 in 2011 (an increase of 15.3 percent). The Weinstock Department of Emergency Medicine on the Fanya Gottesfeld Heller Floor similarly continued its rapid pace of advancement with 114,000 patients treated (in relation to 105,400 in 2011 – an increase of 8.1 percent). Increases were also recorded in the Day Hospitals (adult, pediatric and surgical) as well as in both the pediatric and adult dialysis treatment units.
The hospital expanded its workforce in all relevant areas including new hires of physicians, nurses, paramedical staff and administration and maintenance staff. Prior to the merger with Bikur Cholim 2,495 people were employed by Shaare Zedek, with several hundred more to be added as a result of the agreement.
Shaare Zedek Director General Jonathan Halevy addressed the continued increases saying, “We take considerable pride in witnessing the trust and confidence that the patients place in Shaare Zedek for top quality medicine combined with compassionate care,” he said. “The past year has been one of considerable accomplishments on both the clinical and research levels and we are confident that the coming months will be ones of formidable development in many areas, which will offer continued benefits for the people of Jerusalem and Israel.”